Book Review: "If She Dies" By Erik Therme 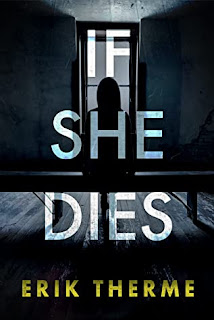 First and foremost I must say, "Thank you" to Erik Therme, Thecker Books, and Goodreads for this Giveaway.

I've been reading Erik's books since 2018 with Keep Her Close and I Know You in 2019 and now If She Dies and they've been increasingly better with each new addition.
This one was a suspenseful and masterful piece of enjoyment from start to finish.
It begins with a terrorizing situation with the death of a child named Lily. Lily was the daughter of Tess and Josh. She was killed in a car accident in which Brady was driving. Brady is serving two years in prison.
We're not aware of the fine tooth details until later but when those are added on it's full blown chaos.
The fact that Meg and Brady have a daughter- Eve- and it's an unfair feeling, having his daughter live while Tess's is dead.
So, what's a gal to do?When Eve suddenly goes missing everyone points fingers in Tess's direction as she's got zero
alibi.
Until, the facts come out.
The truth of the matter is that many characters are shady. They each have something to offer and some even have their own hidden objectives and motives.The truth is skewed with the lies.
Was Eve kidnapped?Why did it appear that Tess was always aware of her location at all times?
WTF?
What about Colin -the twin- of Tess. Could he have taken Eve?How about the relationship between Josh and Tess?Is their marriage on the rocks? Did he ever discuss his own past relationships? His first love?Could their be more to this story? This kidnapping? These lives?
This was absolutely splendid!
In fact, it was so good that I decided to read the bulk of this early this morn so I'd be wide awake. I'm glad I did because this deserved my undivided attention.
It was so good that I zipped through this w/o a moment's hesitation and couldn't wait to see how it all ended.
The hidden secrets among Brady's family was quite extraordinary and really shed a light on toxic relationships.
Thank you to Erik Therme, the pub, Goodreads Giveaway, and Amazon Kindle for this ARC in exchange for this honest review.
Posted by The Secret Book Sleuth at 6:59 AM

The Secret Book Sleuth
Welcome, Yes I'm that lady with books all the time. Nine major publishers approved at Netgalley & 88% or higher feedback, an Unpaid Trade Blogger with approx. 11-20 blog tours every month, Macmillan Publishers RCI (Reading Insiders Club) by invite only; Top 28 USA Reviewer of All Time at Goodreads with 1,214 books read in '20 and 1,300 goals in '21. I'm also a proud mom of 3 teens honor roll teens, President's List in College, NHS, High Honors and more. My daughter was a PIAA First Team All State Selection for Volleyball in her Senior year of high school. I'm a straight talker, advocate for injustice, voracious reader, who believes in the underdog, strives to help others in need, & fights for the rights of the impoverished & abused. I've been seeking a full time paid position with my MPA/CJ degree since 2010 & have high hopes for a bright future ahead. I'm currently below poverty having left abusive marriage. I hope you enjoy my new blog! https://www.linkedin.com/in/donna-hines-5595143b/ https://www.goodreads.com/user/show/47259487-donna-hines